Since its foundation, the Irish Memory Studies Network has run an annual seminar series, as well as a number of workshops and conferences. Podcasts from many Network events are available via our Memory Cloud

This Symposium is funded by the UCD Decade of Centenaries Programme, the UCD Humanities Institute and run by the Irish Memory Studies Network (www.irishmemorystudies.com).
Registration is via EventBrite: https://www.eventbrite.com/e/after-the-war-tickets-26093140285
The cost of registration is €20 and is payable on the day at the venue. Student/Unwaged registration is free (but it is still necessary to register).
The conference organisers are:
Emilie Pine (UCD School of English, Drama and Film)
Maeve Casserly (UCD School of History and Archives & School of English, Drama and Film)

The ISTME network (2012-2016) aims to investigate the transcultural dynamics of memory in Europe today. Studying how memories of the troubled twentieth century are transmitted and received across Europe, the Action explores the tension between attempts to create a common European memory, or a unitary memory ethics, on the one hand and numerous memory conflicts stemming from Europe’s fragmentation into countless memory communities on the other.

The final ISTME conference will focus on the ways in which memory is located and dislocated through processes of production, transmission and reception. Given the dynamism of memory at local, regional and transnational levels, how, when and where is memory located and defined? What are the ethical challenges in these acts of location and definition? What are the ways in which memory is continuously dislocated, via mediation, remediation, consensus-making and conflict? In an age of mass migration, how are memories produced by communities that are themselves dislocated? Is memory the object that is being located or dislocated, or is it a signifier of the location and dislocation of particular memory communities? Is the tension between location and dislocation central to the practice of memory? What new methodological approaches to memory studies can usefully be brought to bear on these questions?

Working Groups: This Network consists of three working groups: 1. Politics 2. Media 3. Migration. Please indicate on your proposal with which thematic area your paper is associated.

Postgraduate Training School
UCD and the COST ISTME Network will host a postgraduate training school in transcultural memory studies (29 August-2 September) that will overlap with our final Conference.

About the School
The training school is for PhD candidates who wish to participate in the Network’s research
activities. The aim is to introduce PhD candidates to the Network’s theoretical and methodological
approaches to transcultural memory, and to prepare PhD researchers for professional engagement
in these fields.

The Research Network In Search of Transcultural Memory in Europe is a COST funded Action that
aims to go beyond the nationally oriented memory studies that tend to reify the bond between
culture, nation and memory. Instead we investigate the transcultural dynamics of memory in Europe
today. Studying how memories of the troubled twentieth century are transmitted and received
across Europe, the Action explores the tension between attempts to create a common European
memory, or a unitary memory ethics, on the one hand and numerous memory conflicts stemming
from Europe’s fragmentation into countless memory communities on the other.

Drawing on recent theoretical insights that point to the importance of memory migration, mediation
and new media the Action seeks to develop new methods for studying and comparing effects of
memory transmission over cultural borders. The Action aims to develop European memory studies
theoretically and methodologically by focusing on transculturality, agency and reception – and to
contribute to finding ways of accommodating memory conflicts.

The training school will consist of a two-day workshop during which PhD candidates will have the
opportunity to present their work and receive personalised feedback from workshop moderators.
Participants will also attend lectures by leading scholars in the field, including Professor Astrid Erll,
Professor Susannah Radstone, Professor Michael Rothberg and Professor Francoise Vergès.

The focus of the training school at UCD will be in line with the Network’s concentration on
transcultural memory in Europe, with particular attention paid to issues of mediation, migration and
conflict in the context of the theme of locating and dislocating memory.
Participants will be selected by a steering committee. Applicants should send:

to istme2016@gmail.com by June 1st. The Network is able to offer a number of grants to cover
travel and accommodation expenses. Please indicate in your application if you will need a grant.

Talking about Perpetrators is a seminar of cross-disciplinary presentations and discussion looking at representations and narratives of perpetrators and perpetration. The event will include participants from the arts, law, media and social sciences. Talking about Perpetrators will take place in the Presidents’ room, Dublin Castle (the former Children’s Court of Dublin, where children were sentenced to industrial schools) on 29th October. This event, supported by the Irish Memory Studies Network and Irish Research Council, is a collaboration between Dominic Thorpe (UCD Artist in Residence) and Dr Emilie Pine (UCD school of English, Drama and Film).

This lecture, by internationally recognised expert Anne Whitehead, will discuss the representation of trauma in modern fiction.

Researching Revolutionaries During the Decade of Centenaries

An All Island Commemoration Network Event 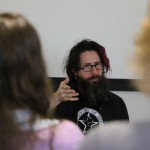 Details
The third lecture series of the Irish Memory Studies Network, on the theme of ‘Methodologies of Memory’, was hosted by the Humanities Institute, University College Dublin, from December 2014 – April 2015. The series was generously funded by UCD College of Arts and Celtic Studies and the Irish Research Council New Foundations.

Ways of Representing the Past: Documentary Theatre in Ireland and Brazil. 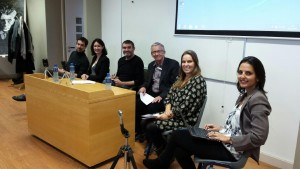 Attilio Favorini opens the Introduction to Voicings: Ten Plays from the Documentary Theatre (1995) with Herodotus’ comments on The Capture of Miletus, a play on the recent Persian Wars by Phrynichus, performed in Athens in 492 BC, only some two years after the events it depicted. According to Herodotus, ‘the whole audience at the theatre burst into tears and fined Phrynichus a thousand drachmas for reminding them of a calamity that was their very own; they also forbade any future production of the play.’ The origins of documentary drama are then as old as that of western theatre itself and the form has lost none of its power to shock. This panel considers the ‘calamities’ that are our own.

Aideen Howard is Literary Director of the Abbey Theatre, commissioned No Escape and devised Down off his Stilts, a play about Yeats and the Abbey.

Colin Murphy is a journalist and author of Guaranteed!, a play about the government’s underwriting of the banking collapse, which is now also a film.

Jimmy Murphy is author of Brothers of the Brush and Kings of the Kilburn High Road is currently developing Of this Brave Time, a documentary about the Easter Rising for production by the Abbey in 2016.

Beatriz Kopshitz Bastos is literary advisor and produce of Cia Ludens, the Sao Paulo based company currently developing Amazon Diaries, a documentary play on Roger Casement’s time in the Amazon.

Alinne Fernandes has a PhD in Theatre and Translation from QUB and is currently working on the translation of Irish documentary plays (including No Escape) for a series of rehearsed readings by Cia Ludens.

Details
The second lecture series of the Irish Memory Studies Network focused on aspects of memory in relation to concepts of society and community, and considered the role of memory in community formation and cohesion.

March 3 – Professor Richard Kearney
The Politics of Memory: Between History and Imagination

Memory and Trauma: The Body in Pain in Irish Culture

Details
The first lecture series of the Irish Memory Studies Network, hosted by the UCD Humanities Institute in Spring 2013, featured work on diverse aspects of the ethics of commemoration and the role of gender in shaping commemorative practices and reception.

Lecture 2: Louise Lowe, ‘Laundry and the Memory of the Magdalen Laundries’
In this lecture, Louise Lowe, Director of Anu Productions, discusses the genesis and making of the award-winning 2012 theatre piece Laundry.